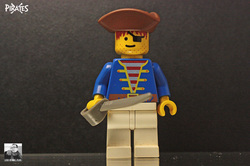 Here is the lego version of Glen. Nice.

As I am in Madeira the host with the most is BACK by popular demand.
This time he has fewer questions about Pirates I promise!
Have a good one - and we'll compare tan lines next week. 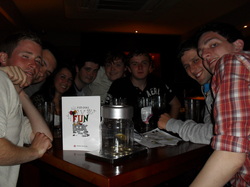 There was great excitement in The Beefy as we cast off and headed out to be tossed about on the Seas of Quizness as our usual Captian, the bald one, had been replaced by a cunning Bucaneer Captian G the QuizMaster of the Sea. Gone was the gay blue sparkly flag of Sir James replaced by the Skull and Crossbones of The Pirates.

The usual crews were all aboard their respective ships with The Pirate crew numbers swelled with the presence of Pirates Caroline, Loraine J, Lorranie O, Donald and Dave. So motley crews all round.

After the first broadside was over it saw the Tennents crew it tatters bringing up the rear, just the way they like it, or so they said. However, it was The Pirates and The Steven Hawkings crews that had the wind at their backs taking an early joint lead.

On to round two an again the Tennents crew were stuck in the Doldrums being to only ones not celebrating up The Olde Seadog for getting full marks. Obviously none of these boys had look over the side to see what an anchor looks like as they left that picture blank!

The Sea Shanty, or music, round was a mixed bag all round with the Pirates thinking Daniel O'Donnell could do impersonations of Noise Control !!! Up the Crow's Nest for them.

On to the Bounty Bonus round and before the question was even finished Priate Lorraine O gave a hearty shout followed by the correct answer and the 5 points were in their treasure chest and the Hawkings Crew were now staring at the Pirates stern.

All crews had a fair wind crossing the sea of Mystery with little change at the top but, ship ahoy, the L and R crew were sneaking up on the evil ship Hawkings.

With the rum a flowing great things were expected in the jokes round but it fell foul of the Mal de Mer, resulting in a poor taste poke at Captain G being the winning entry by ..... who else but the Pirates.

So the Jibs were cut and the main sailed spliced to get us to the final treasure. The result clearly showed that the Tennents crew had given up the ghost and not even throwing Jamie over the side had helped their cause, making them our Rear Admirals

But drama remained to unfold. The Hawkings crew had put the Sirens curse on the Pirates who shivered their timbers and were pipped at the post by one point by ... Crew Hawkings, giving them the booze, the book and the pirate lanyard.

On they went to dig up the treasure but failed as did all the other crews, so it was one more chance each with the Pirates getting to the chest  but letting one of the other crews open it. So who got the Dubloons. the book, the DVDs and the pirates lanyard? None other than our Rear Admirals ... the Tennents Crew. Well Done me Hearties.

A grand "hussar" was heard for the dashing Captain G as he sailed off on the good ship Corona across the Sea of Stella. Legend says that one day he shall return, but then who believes in Legends .......... 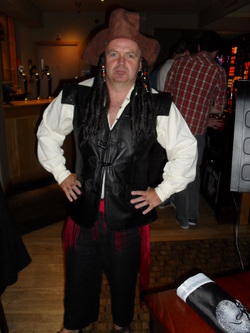